Siobhán Campbell Review of 'The Unreturning' in POETRY IRELAND REVIEW 132 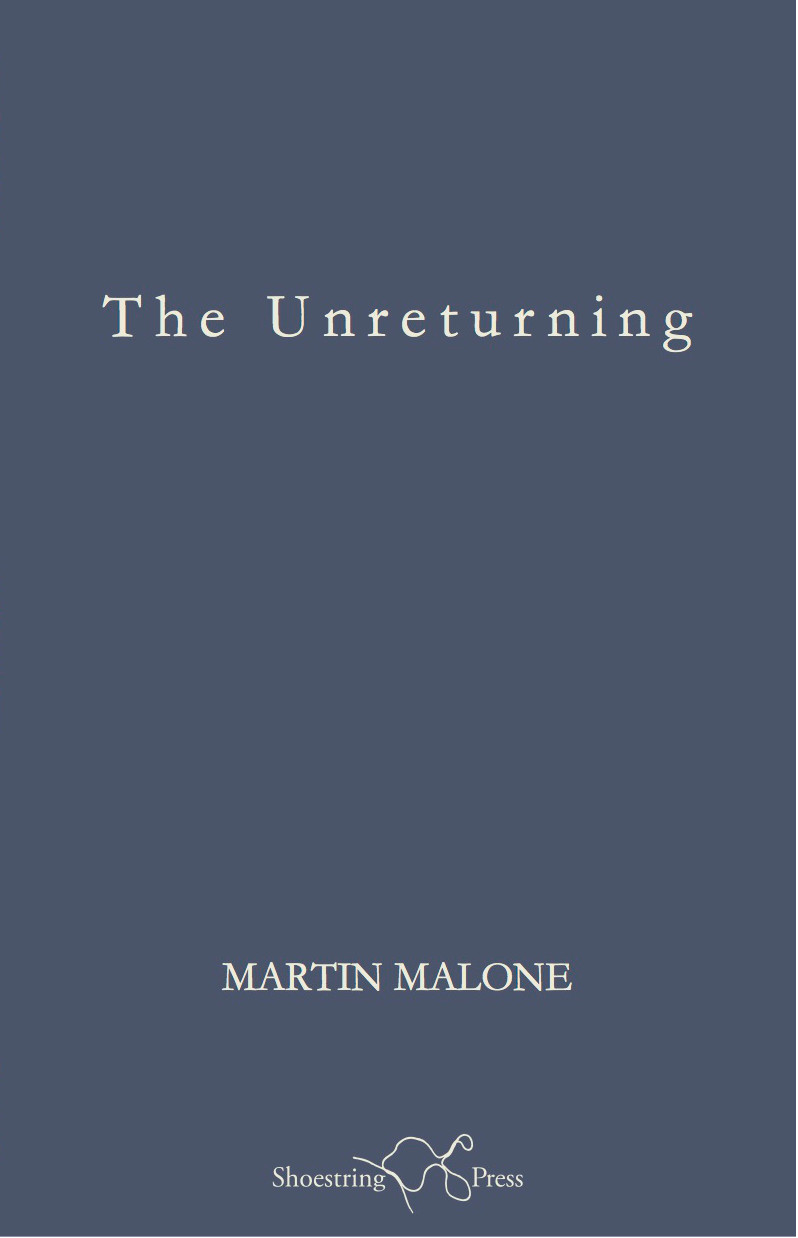 THE TASTE OF TIME

Martin Malone’s third collection, The Unreturning, is a deeply serious, yet playful meditation on the current zeitgeist, our collective myth-making and its very real consequences. The title may refer to the Wilfred Owen poem or it may refer to The Unreturning Army, Huntly Gordon’s memoir of Flanders which details experiences of the battle fields that seem almost inconceivable to us now. But Malone seems to imply that the battlefield has always been of our collective consciousness, or more to the point, our propensity to accept the ‘given’ story along received hierarchies of power. Throughout there’s a tension between the world-weary and the elgiac, between a modern ennui (which he skewers with punchy satire) and an echo of long for the transcendental moment, which, he seems to imply, is the provenance of art, but only of an art which is socially engaged. The reader is to be wary of the misuse of history and of poetry, of ‘The eye’ that ‘seeks out pattern and is satisfied’ (‘Archives’).

It is a book of two halves. ‘Ghosts of the Vortex’ presents lyrics written with great authority, and interested in the line, the stanza, and in striking phrasing which inks itself into the brain. We are to understand our responsibilities to recognise ‘trench honesties/ occluded by one century/ and the paradigms of myth’. May pieces use ‘you’, implicating the reader and Malone is not afraid to also use the collective ‘we’, something out of fashion in contemporary poetry, but useful in his exposure of ‘our tribal code’. The titular second half, written in single-paragraph prose poems, seems to imply no easy return to the lyric and a searing imperative to re-think, reimagine, and re-invent ourselves. There are no easy answers in these poems. They wear a huge range of references lightly and they beguile with prose sentences that come to seem the very stuff of poetry – a difficult thing to achieve. From MOOCs to the Poundshop, from Churchill’s cock-ups to Photoshopping our legacies, Malone takes us on a dizzying ride through both popular and esoteric culture, and yet this work does not disappear into its own scholarship or cynicism, but keeps providing earned, if transitory, glimpses of the human need for meaning. ‘Moon, moon! He says, as if the word holds the heft of all things.’ (’Commuter’). Somewhat reminiscent of the early work of Geoffrey Hill, perhaps most particularly of Mercian Hymns, Malone’s work manages to convey the anguish of a deeply moral sensibility by playfully upending and reinventing traditional lyric tropes and by using the prose poem as a form which provides both a scaffold and a restraint for his uncompromising vision. Beware, though, he may be addressing you: ‘Thank you for your neo-concern’; and ‘be advised, your poppy/ is not mine’ (‘Dear Revisionist’).

Oops, you forgot something.

The words you entered did not match the given text. Please try again.